I will begin with a brief outline of LRP, which was the subject of a previous article.

Locker-room power is the myth on top of the reality. It is the perception that a player is better than he or she actually is, by other players talking about their game in a way that creates an aura.

What is locker-room power? Locker-room power is the term I use to define the difference between players who win things and those who do not. It is part of the formula for success which I have developed.

LRP is a formula and every part of the formula is important. LRP can be learned by smart training and smart use of language. It is the putting together of an advert that reflects a great attitude towards competition and a clear belief and understanding of the formula and how to build your personal power from the formula.

This article intends to expand on the LRP concept and show how a player can sustain his/her LRP once this respect has been gained. The aim is to elevate LRP to a level of true respect.

True respect means that a few bad results are perceived as a bad spell, a glitch rather than a crisis. Whatever level you compete at, it is important that you work hard enough and mentally keep it together enough until you are firmly established at the level you have been aiming for.

The enemies of mutual respect and the ability to put fear into opponent's minds are complacency, arrogance and - the most common enemy of all - the insecurity of not believing you belong. I will tackle each of these individually.

This is a fairly common occurrence and often is the first sign of the underlying fear of success. Players get complacent when they have worked hard to achieve a goal. Once attained they fall for a false belief of thinking that "once I reach my goal I will be able to relax and reap the rewards of my hard work".

Unfortunately when players reach a goal they usually attain it on a wave of momentum and confidence. When they take their foot off the gas, nothing goes wrong for a good while because of the belief, confidence and often the excitement which accompanies this breakthrough. This will compensate for the short cuts. However when the inevitable losses occur, the work ethic which is the real backbone of confidence is not in place and the player falls through the floor. Naturally the LRP is lost, because the other players know instinctively that short cuts were being taken and are often surprised that the fall does not happen earlier. True competitors do not respect complacency.

Arrogance based on confidence, belief and a valid work ethic can be a strength, even though it is sometimes ugly. However when it is based on a lack of respect for opponents, to the point where it is no longer possible to perceive the danger opponents possess or indeed the improvements they have made, it is an enemy.

Arrogance has another bi-product, which is equally damaging when a player no longer thinks that he/she can learn from anyone because they know best. Arrogance can also lead to complacency. The "I'm so good I don't need to work as hard" attitude. Over-confidence spells doom because over-confident people do not take care of details.

I have coached a number of players who have proved that they belong at the next level, but they panicked when they got there. The main source of this panic was the lack of belief that they could sustain the level that they had reached, afraid that at any moment their abilities would desert them. This insecurity is powerful but based on a flawed logic, which is the belief that all players at this level are secure and are basically better than them and that sooner or later they will find them out.

The other flawed belief is that the players left behind are all ready to take the next step and are ready to gobble them up as soon as they lost a couple of matches.

They also panic at the first sign of trouble and do not realize that with the right attitude there is time for an adjustment period. Players respect and know from their own experience that it takes time to adjust to a new level. The truth is that many of your opponents will not be better players and could even be considerable less talented – their secret is their belief and their discipline to keep any panic at bay under pressure. 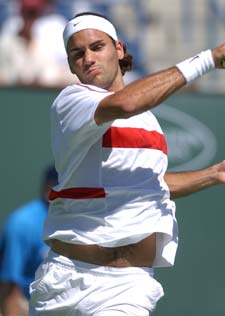 Here are some key points to help you break through to the next level and to keep breaking through to higher levels of competition:

Sustaining LRP at a given level is achieved when you first break through by competing for every match with the discipline that got you there. Keep your work ethic and use your new-found confidence to set new standards for yourself. There will almost certainly come a time when you lose a few matches in a row, which is the discipline test. All eyes at this level will be watching to see if you can manage the bad spell without creating a crisis in confidence with the classic 'losing it' reaction. 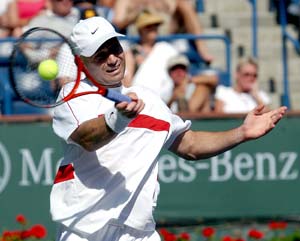 If you keep your discipline the moment you win again they will accept you as the real deal and someone who belongs at their level. It is at this precise moment when you feel comfortable at this new level and you are accepted, that you make yourself uncomfortable again by raising your standards. This rattles your cage and signals to those around you, your intent to get even better.

It is this intent that will keep you at the level you are at, or help you move higher. It is the finest guard against complacency and the loss of the LRP which, if lost, can quickly drop you down a level or two.

Most players are trying to improve, so if your aim is to stay where you are you will find yourself behind in double-quick time. Remember:  consolidating locker-room power is not a relaxing time. Rather it is the time when you show the most fight and the most discipline. by David Sammel