Would it surprise you to learn that many matches, at all levels of the game from the youngest juniors to highest touring pros, are won or lost even before the first ball is served? I call this locker-room power.

So, what is locker-room power? It is the term I use to define the difference between players who consistently win things and those who do not. It is part of the formula for success I have developed and understanding its ramifications can improve your game and your chances of winning matches and tournaments.

The formula for success

D + 2W + B = LRPLet me unlock the power of this formula by explaining in more detail how it works.

This gives a person the motivation to do all the hard work involved to reach their goal. It is the desire to do whatever is needed for however long it takes. It is the glue, the ability to compete and run for every ball and the strength to carry on during the 'low times'.

A player needs to develop at least two weapons that really hurt opponents. These are two attributes that win points and that strike fear into opponents.

This develops over time when it becomes obvious why a player is winning matches. It is born of a great intent to hurt opponents with their weapons and the execution is consistent enough to cover their weaknesses.

The fear factor that is needed to seep the desire and belief away from opponents, so that many matches are won before a player steps on the court. LRP causes opponents to lose confidence during a tough match or doubt to creep into their mind in a crisis.

How does LRP manifest itself at different levels? Sport is not an exact science so the use of ages or terminology is adjustable. Below are examples of the common reasons why certain juniors are better than others, or why a player is effective at club level, or indeed what it takes to win a Grand Slam.

In general the two weapons used to win at junior level will be either:

Physical strength and growth/co-ordination limitations conspire against other children trying to build different weapons that will eventually be power-based or attacking-based weapons. However as these players move towards 14 there will be a growing evidence of their ability to win points and matches over the consistency players. If consistency is going to last as a weapon, use of accuracy and length combined with outstanding foot speed is essential.

D + 2W + B = LRPThe best player in a club or league is often identical to an under-fourteen player, with desire being the critical factor. How hard is an adult playing for recreation prepared to push in order to win? Since strength is available, there are many combinations of weapons that players possess that are effective:

The list can go on and on but the successful player will have harnessed their desire into a relaxed focus (a mature level of concentration) to consistently execute whatever weapons they possess. It is worthwhile analysing your opponents and getting a clear picture of what their two weapons are and how they use them to win. Using this knowledge you can learn not only how to defend against the weapons but also how to find a way of introducing your own weapons into the game.

D + 2W + B = LRPBased on this formula it is easy to understand when players have LRP and when they lose some power. Current examples of LRP on the up and LRP waning would be Andy Roddick and Andre Agassi. Roddick has the desire (done the work) + 2 weapons (serve and forehand) and belief (helped by Brad Gilbert which started with winning Queens, followed by 2 Masters Series after Wimbledon) = LRP (which helped him steamroller many players and get him through the crisis match with Nalbandian) Also his win over Roger Federer in Montreal sent a clear message to the tour that he was still improving quickly.

Agassi may still have the desire + 2 weapons (early ball and precision) + belief (he has done it so many times before) = LRP. However LRP is based on winning and perception and the perception is that he has lost half a yard in speed.

Whether it is true or not is irrelevant because he gets less easy matches because many players believe they can beat and are prepared to test Agassi longer and harder. This means longer and tougher matches, so he has less recovery time when he is at an age in his career when recovery is slower, which is a double whammy. The fact that Andre has more than two weapons plus experience explains why he is still a force and can possibly re-establish momentum to win another Slam.Injury is also a factor that hurts LRP and Serena Williams will face an eager Justine Henin-Hardenne plus others with renewed belief that they have closed the gap. They will want to test her for vulnerabilities when she returns.In all players' careers, the LRP is stronger at different times and sometimes it seems so strong as to make a player invincible for a period or a tournament. Pete Sampras had it for 6 years, lost some of it for 2, then on the back of wins over Greg Rusedski (who by his own admission had too much respect, having played through the height of Pete's LRP) and Tommy Haas, and re-established his LRP for one last Grand Slam. It is remarkable how great champions retain LRP for several years and establish great rivalries when they clash with each other with equal amounts of LRP – they truly play with belief and confidence and without fear.

It is possible to reinvent yourself as a player and add a weapon to your game. For example if Lleyton Hewitt emerged in the new year going to the net more, with greatly improved volleys and won a few tough matches he could re-establish the fear factor.

Locker-room power is a mixture of unconscious desire and conscious work to manifest this desire.

Although desire is an essential ingredient of success, it is also something that can grow over time and often becomes a burning ambition once a player is a good way down the road. For this reason it is practical to identify your two weapons first and possibly find out something about your desire, by how hard and methodical you are at improving these weapons.

Whatever level you play at you can work on improving your LRP. The first step is to get clear in your mind what your 2 weapons are and when they are most effective. Secondly you need to have the desire to do some work (or lots of work if you want to be a pro) to be good enough to engineer points so you can use your weapons. You need to work on your weapons so you can execute consistently.

Thirdly, identify whether you are still losing because you have one or more major weaknesses. This can cause your game to break down too early in points before you have a chance to use your weapons.

Fourthly, do you believe in what you are doing? It is important that opponents have a perception that you are going in the right direction and, as you win more matches, they begin to realise why you are tougher and start to worry about your weapons before they walk on the court. When other players start to make comments about your weapons, LRP begins to grow.

Here are a few examples of what I teach to build LRP:

1. Attitude! Attitude is the number one key. Teach players to become an advertisement for themselves. It is not about what they cannot do but rather "I can do this and I will improve in that".

2. Video yourself walking onto the court. Is your demeanour showing someone confident and keen to play, or does it show someone nervous and scared?

3. Manage locker-room language. Never underestimate opponents or talk in a manner that can be used as an excuse. Locker-room walls have ears. Remember the club lounge, the gym and restaurant are all part of the locker room.

4. Put out positive publicity if it is true. For example if you have just finished a tough physical bloc and are fitter than ever before, drop this fact into the odd conversation. This only becomes powerful, however, if you show in practice a desire to chase every ball and especially if you show extra speed and endurance in matches. LRP is cemented when an opponent thinks "Wow this guy wasn’t kidding when he said he was fit" and further more tells other players after the match, whether he won or lost.

5. LRP starts with substance. LRP is the 'mystique' on top of the substance when people begin to exaggerate the depth of your weaponry and begin to feel that opponents need to play above themselves to compete. On any level this is double-edged. Opponents think you are invincible and in turn you begin to feel invincible and your confidence becomes immense. This combination is very hard to beat. 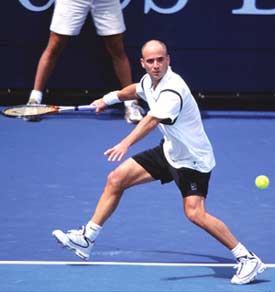 6. If you advertise a bad product well it can work a little against easily-impressed players but the great thing about sport is that bluff is not sustainable in the long run.7. LRP is a formula and every part of the formula is important. LRP can be learned by smart training and smart use of language. It is the putting together of an advertisement that reflects a great attitude towards competition and a clear belief and understanding of the formula and how to build your personal power from the formula.

The bottom line underpinning the whole formula is the desire to do the smart work. The formula is a help for players to be clear about what work is needed, as it is no use working hard in the wrong direction.

Many players hope to be successful but this hope is undermined by the bare fact that deep down they know they are not working hard enough and this very fact causes them to hand over LRP to those players they know are doing the work. Coaches and trainers attempt to find ways for players to believe in themselves, but they ignore LRP at their peril. It is important to understand this factor, because most matches and tournaments are still being won by the momentum of building LRP. by David Sammel