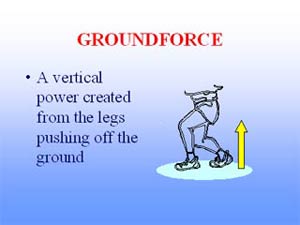 I will not spend much time on this much understood and explained source of power. Most players and coaches are well aware that the initial source of power comes from bending the knees and using the ground to push off to create ground force, the starting point for power. 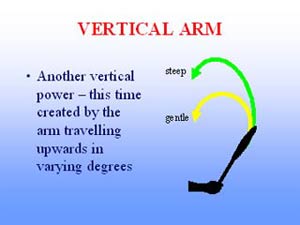 The Vertical Arm is often a source of power when a player catches the ball late. Consistent use of this source is usually associated with poor footwork and technique. However, top players use this effectively to impart power when caught late or to whip up extra power and spin on the stretch or to accelerate the arm to create power and spin when picking up a very low ball.

Nadal is interesting because he adopts this style routinely on the baseline, although even he had to begin to flatten out and go through the ball more from the midcourt. This power is associated more with full western grips, but all top players will employ this power if late, on the stretch, or picking up a very low ball.

The sign of vertical arm power being imparted is the follow through, which finishes behind the head. racquet head speed is imperative in executing this shot successfully.

On the run, both Agassi and Federer absorb the weight of the ball yet still impart much power with a fast upward swing

Again much has been written about rotational power. The photos alongside clearly show how long Roger has held the right leg behind the left to act as a break and therefore increase the speed of his arm swinging (rotating) around his body.

Effectively his racquet is acting like the crack end of a whip. This is a classic forehand with the power beginning with the legs driving up thru the hips with an upward extension and rotation, the right leg acting as a break only coming forward at the end of the shot. Again racquet head speed is important just the same as a whip will not crack without a fast arm 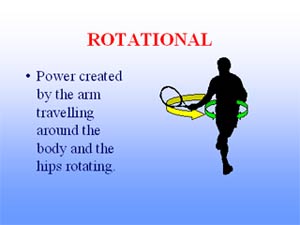 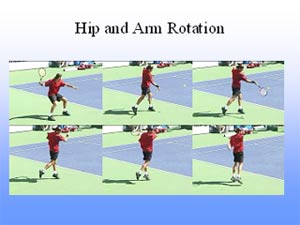 Perhaps the graphics above help to further explain rotational force. The activation of the right glute as a brake (counter force) results in the arm swinging through the ball and rotating around the body faster.

This power comes from the body moving directly behind the line of the ball, commonly known as moving through the ball.

It is my belief that being able to move through the ball at the top of the bounce is often the difference between a good player and a class player. It allows players to attack easily and get forward fast, one difference between Federer and Roddick. Roddick tends to set and hit then, move forward rather than using the smooth transition of a hop through step behind the short ball that allows Federer to get closer to the net quicker. Tim Henman and Pat Rafter are classic movers behind early slice backhands to get forward quickly.

Not only is power gained by the body following the line of the ball but it can also be gained by the racquet flattening out behind the ball. An easy way to learn this linear power is to imagine hitting three balls in a row as shown left, a tried and tested coaching tip. 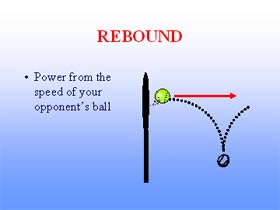 Another source of power not often talked about is the use of the pace your opponent is feeding you with the force of his shot. The pace of the ball that you strike has within it its own energy which rebounds off the strings of your racquet. Using an opponent’s pace effectively is one of the attributes that separate top level players from lower level players. One of the greatest exponents of creating power and taking away an opponent’s time by getting the ball at the top or often before the top of the bounce was John McEnroe.
However, most players experience this power often by accident when sweetly rebounding a volley without much racquet movement at all. The secret to good volleying is being able to use the pace of the ball rebounding off the strings in different ways. Off the baseline or on return of serve relies on good timing and control of the size and speed of the swing. 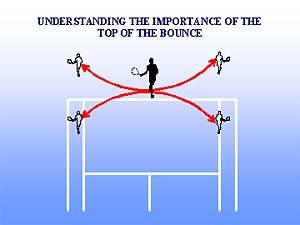 Below are two graphics that illustrate the advantages of taking a ball at the top of the bounce. The one on the left explains how time is taken away from the opponent. It shows how a ball loses almost 50% of its speed from the time it bounces to the top of the bounce and continues to rapidly lose speed, so once it has dropped to half way from the ground before the second bounce it is almost half the speed again.

If you play the ball at this point you are up to two yards further back (see graphic on the left) and have half the rebound speed to utilize versus the player who plays the ball at the top of the bounce. Also there are precious tenths of a second lost in the time it takes the ball to travel the extra distance both ways (before you contact and after compared to the contact point at the top of the bounce)

Another example is if you run across the baseline for a ball. If you run towards the top of the bounce you can cut off the corners creating more of a banana shape rather than a lateral run (which leaves you 2-3 yards further back in the court) giving your opponent more time to play. It is not always possible to move fast enough to cut off the corners but it has to be your intention when running for a ball. 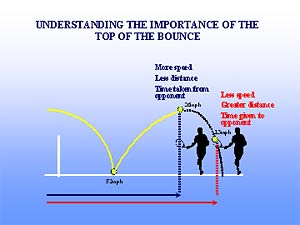 On the right, Agassi, one of the greatest top of the bounce exponents and rebound power players, was able to add his own explosive swing to that power. On this return of serve he has very little backswing and relies on linear arm and rebound power to place his return – using the pace of the serve against his opponent. 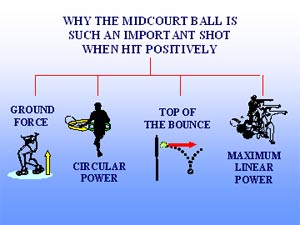 Lleyton Hewitt on the right, shows how the importance of the midcourt ball can be explained. It is the one area of the court where a player can bring nearly every power into play and maximize most of them.

The player can explode off the ground following the line of the ball with a hop-through step for maximum use of groundforce and linear body power. He can flatten out the shot for maximum linear racquet/arm power and also explode the hips and arm with powerful rotation.

You would also expect the player to take the ball on at the top of the bounce using whatever speed the opponent has imparted for some rebound power as well.

You can quickly deduce what needs to change if, for instance, from the midcourt a player is imparting too much vertical racquet power and "fizzing" the ball short with excessive topspin. By asking the player to deliver more linear racquet power and less vertical arm power you can often solve the problem. Understanding the different powers and relating them to a graphic equalizer allows you to turn the various powers up or down and is an excellent aid to learning technique. Explaining to a player how he is creating his power may quickly lead him to alter his technique without needing to talk about technique. 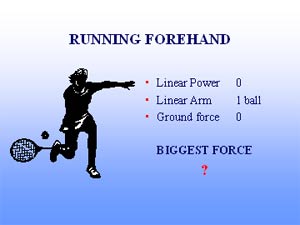 Using a second example of a player running laterally along the baseline to pick up a low ball on the run, you can ask the player to clearly define which force will be the most dominant. At full stretch he cannot move through the ball, hardly play through the ball with the racquet, so to create power he will have to impart upward vertical power like that executed beautifully by Andy Roddick on the right. Clearly in the above example there is no linear body force, little groundforce, possibly one ball length of linear arm/racquet, some rebound help so the major power source is vertical power in the form of a fast upward vertical swing. Teaching the sources of power is an additional tool to help learn and modify technique by helping players decide which powers they can utilize and how. If they modify the power supply, it will change the way they hit the ball to get the desired result.